Torahs from a Mole

Inspiration from the life of Mr. Ira Lipman, z"l

Unlike most other Yeshivot, at Kohelet we've had a longstanding tradition of having school on the morning of Erev Yom Kippur in order to help set the mood and frame of mind for our kids before entering into one of the most important - yet difficult - days for any Jewish teen.

Here is link to a clip of our high school "slow shirah" minutes before we dismissed on Tuesday.  It includes a message (starts at ~6:30) I gave to our students based on the life of Mr. Ira Lipman, who passed away on September 16.

What follows were my initial thoughts in written form.  While my actual talk followed the general form and content of the written version, it was not a verbatim replica.

By the mid 60’s John Chancellor had become one of the most recognized and respected personalities in the American news media.  A news anchor for NBC for most of his career, Chancellor rose to prominence largely due to his coverage of the famed “Little Rock Nine.”  In September 1957, nine African American high school students put Brown v Board of Education to the test as they exercised their legal right to attend the historically white Central High School in Little Rock, Arkansas.  These nine students, however, were famously turned away when, by order of the Arkansas governor, they were turned away by state troops. In response, President Dwight D. Eisenhower sent federal troops to Little Rock to escort these young men and women into their school and to protect them while they were there.

While Chancellor’s coverage of the story during the Fall of 1957 and its impact on the subsequent Civil Rights movement is well known, until a few weeks ago the details of how exactly he got his inside scoop was a story far less told.

Chancellor had a mole.  He had someone on the inside of Central High School who would call him from the payphone when no one was within earshot and give him an account of what was happening.  That mole was a Jewish kid with roots in Philly, named Ira Lipman.

Ira’s parents moved from Philly to Little Rock in 1935 as his father was building his business as a private investigator and he was born 5 years later in 1941.  Like Jews in much of the South, Ira’s parents were prohibited from joining the local Country Club, so they joined the Jewish Country Club instead. It was there in the summer of 1957 that 16 year-old Ira befriended an African American teen named Ernest Green who was working at the Country Club. A few months later Green would become one of the Little Rock Nine.

Not long after befriending Green, Ira was working weekends helping to cover the sports desk for the Arkansas Gazette.  There he happened to meet Frank McGee who was the local NBC news correspondent covering the emerging story of the rumored desegregation of Central High School.  Ira must have expressed his feelings on the matter to McGee who then passed it on to Chancellor. Because not long thereafter, the young Ira Lipman got a call at his home from John Chancellor saying that he had heard that Lipman was their man on the ground in Little Rock.  Lipman later recalled that he decided to help Chancellor with his reporting because he “wanted people to see the truth” despite the significant danger it posed to him. As a Jew in the South he knew what it was like to be discriminated against and with his own eyes he could see that what his friend Ernest Green and the 8 others were enduring was something no human being should ever face.  He made a decision as a 16 year old to put himself on the line for his friends. 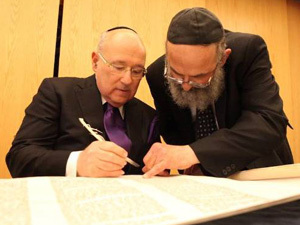 Ira Lipman went on to become a titan of the security industry.  I first met him in 2008 when he decided to give a new sefer Torah, replete with a beautiful silver crown and breastplate, to the school I was running at the time, the Margolin Hebrew Academy in Memphis, Tennessee.  The gift was quite extraordinary given that neither Mr. Lipman, nor his children, nor any of his grandchildren attended the Margolin Hebrew Academy. Nonetheless, he and his entire family, celebrated the entry of that Torah into our school’s Beis Medrash as if it were entering his own home.

When Mr. Lipman passed away three weeks ago at the age of 78, newspapers across the country ran stories about his life.  Almost all of them, including the New York Times, mentioned his role in reporting on the Little Rock Nine. Only one, though, mentioned anything about a Sefer Torah.

That, you might say, isn’t surprising given the fact that donating a Sefer Torah is a beautiful and valuable thing to do, but it’s not exactly news worthy.  And I’d tell you that may be so for someone donates a Sefer Torah. Or two. Or even three. But at the time of his passing three weeks ago, Ira Lipman had repeated the same process he went through with our little school in Memphis, Tennessee with twenty-seven other shuls, schools, and Hillels across the country.  Twenty-eight Torahs, crowns, and breastplates. Twenty-eight dedication celebrations. Twenty-eight labors of love from the Little Rock mole.

As teens, we’re wired to think about the here and now.  It’s hard for us to zoom out and think beyond that test at the end of the week, those friends who we said we were going to meet, or the next level we’re trying to beat.  Yet, if there is ever a time to do so, if there is ever a time to look beyond all the relatively petty pieces of our lives and think about the questions that matter most; if ever there is a time to think not about the meme or video you’re planning to post but about the obituary that will one day be posted for you - Yom Kippur is that time.

Not every one of you will find yourselves in a position to give out 28 sifrei Torah over the course of your lives.  I have no doubt that some of you will - likely those you suspect the least - and I urge you to do so. But everyone in this room will be able to live of life that exemplifies a love of Torah.  Everyone in this room will have boundless opportunities to show the world what the Torah, and a life of Torah, mean to you. Every single one of you - every single one of you - is capable of befriending an Ernest Green.  Someone who may not be the most popular, but may be most in need of a friend. Everyone of you is capable of seeing the humanity in people and of making a sacrifice on someone else's behalf. And, every one of you will have the opportunity time and time again to stand up for what is right, what is good, and what is true.

Over the next 36 hours ask yourself who you want to be.  Ask yourself what you want people to say about you when your time comes.  And then come back here on Thursday ready to make it happen.