A Call for Clarity

Derashah for the 2nd Day of Rosh Hashanah 5780

In speaking last spring with Ha-Rav Moshe Lichtenstein, Rosh Yeshiva of Yeshivat Har Etzion, I mentioned to him that we were planning a 20th anniversary trip to Italy over the summer.  He then informed me that his father and my teacher, Rav Aharon Lichtenstein, ztz”l, had also taken an anniversary trip to Italy with his wife Tovah. He remembered him saying upon his return that every Jew should take a trip to Italy if only to lay eyes upon Caravaggio’s “Sacrifice of Isaac.”

In a faithful act of what we might call Da’as Torah -  U’Madda - upon setting out on a tour of Florence we informed our guide that we must make a point of seeing this particular masterpiece in the famed Uffizi gallery.

To verbally describe a masterpiece of visual art is virtually impossible so I won’t even try.  What I will do, though, is try to give you a glimpse of what is most certainly the paintings most salient feature - and a hallmark of Caravaggio’s work - namely, the faces of its central subjects.  In this work it is the expressions on the faces of Yitzchak and Avraham that immediately jump off the canvas. The most striking is Yitzchak. For centuries, Christian artists had all been painting Yitzchak on the mizbeach in the same way - as a docile, sacrificial lamb, eager to offer himself up to God.  This, of course, in Christian theology is considered a precursor - or even the same act - as that of a man who 2000 years later was understood by them to have sacrificed his life for God.

In Caravaggio’s painting, however, Yizchak is portrayed as anything but docile and serene.  His head is being forcefully held down on the altar by Avraham, his eyes look out at the viewer in terror, and his mouth is open wide with what one would imagine is an awful, gut-wrenching scream. 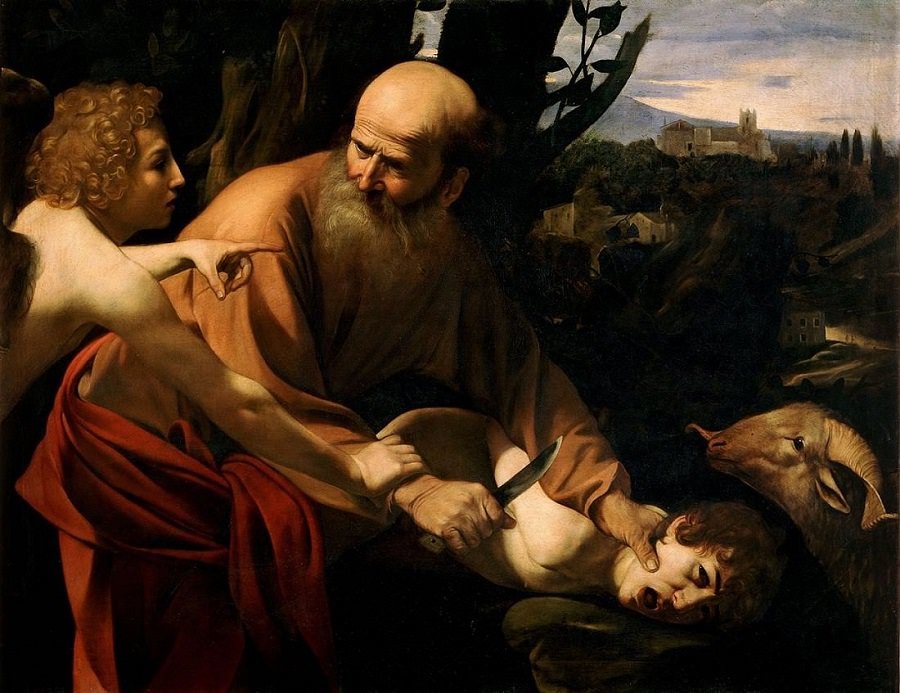 And then there is Avraham.  While one hand pins Yitzchak’s head in place, his other is raised with the knife.  But Avraham is no longer looking at his son because he has turned his head toward the angel who is now grabbing the hand with the knife.  While the idea that the malach grabbed Avraham’s hand from behind is itself novel, it is once again his face that stands out. If Yitzchak’s face bespeaks a sense of abject terror, Avraham’s conveys a sense of utter bewilderment and confusion.  His forehead is wrinkled with a deeply furrowed brow. His eyes look back to those of the malach with a complete lack of understanding. So confused is Avraham that he doesn’t even see the ram and instead the malach has to point to it and show him what it is that God really intends.

Like many of his paintings, and like much of the Renaissance, Caravaggio’s "Sacrifice of Isaac" was initially seen as scandalous in much of the Christian community.  But what about in our community? How do these emotions fit with our understanding of the events and why is that Rav Lichtenstein thought it so important to see?

There is no question that our mesorah clearly preserves the notion that both Avraham and Yitzchak performed the akeidah without the slightest hesitation.  The famous midrash in Eichah Rabba describes the scene in the heavenly court as the Beit HaMikdash goes up in flames and the Jewish people are led to exile.  Each of the avot remind God of the deeds they did, and plead with Him to show mercy on their behalf. And when it is Yitzchak’s turn he says

I willingly bound myself to the altar and stretched my neck beneath the blade.

A far cry from the depiction of Caravaggio.

But Bereishit Rabba tells a very different story.  There we read of Yitzchak the boy who is so anticipates shaking,  trembling and palpitating so violently from the fear of the knife that he’ll hurt his father in the process.  He therefore begs his father to tie him up tightly.

But that’s not all we find Bereishit Rabba.  We also find a description of Avraham that fits Caravaggio’s rendition to a tee.

Indeed, this notion that all was not placid and serene atop Har HaMoriah on that fateful day of Akeidat Yitzchak is captured in one of the oldest parts of the selichot we have been saying every day for the past week.   The piyut is found at the very end of the selichot and begins:

“He who answered Avraham on Har HaMoriah.”  “He who answered Yitzchak his son when he was bound on the altar.”  Answered what? For HKB”H to answer, there must have been a prayer, a scream, a shout - something!  If for centuries we’ve been asking HKB”H to answer us like he answered them, then there must have been more to the story than the dutiful servant carrying his Master’s will, and the subservient child stretching out his neck beneath the blade.  I imagine it was this reflection of our own mesorah - the mesorah of Bereishit Rabbah - that so captivated Rav Aharon with Caravaggio.

Rabbi Dr. Aaron Levine was a much beloved professor of Economics at Yeshiva University and the longtime rabbi of the Young Israel of Avenue J in Brooklyn, NY.  In a drasha that he gave on Rosh Hashanah in 1986, Rabbi Levine suggested that the essence of Akeidat Yitzchak, that which made it Avraham’s last and greatest trial, was precisely the fact that it was entangled in contradiction and confusion.  The most difficult tests we face in life are not necessarily those that exact the highest price. The most difficult tests we face are those where the right answer is unclear. It’s when we struggle to discern right from wrong, up from down - it’s when God promises us a son, gives us a son, asks us to kill that son, tells us not kill that son - our world begins to spin and we can’t get our bearings.  It’s when our mind says 'climb onto that altar!' but our bodies are shaking so uncontrollably that we simply can’t. Those are our greatest tests.

And while sacrificing a child is no longer part and parcel of our daily existence, confusion and contradiction have never been more prevalent.  We live in a world where every fact comes with an alternative, where every truth is disputed, where trust in authority of any sort has hit an all-time low.  We don’t know who to believe, when to believe, or why to bother believing at all any more.

But if the Akeidah was meant to convey confusion and contradiction than the shofar becomes a call for clarity.  It is an ineffable tefillah that emerges from the deepest recesses of our soul, cuts through the tempest of twisted words and mangled messages that surround us and makes its way directly to the Heavens.  With it we ask HKB”H to remember the ayil; to remember the resolution and clarity He ultimately bestowed upon Avraham and we beg Him to bestow it upon us as well.  With each blast we call to mind our own trials and tribulations. The moments we have faced in the past and will undoubtedly face in the future where we find ourself grasping in the dark for the right answer, the correct course of action, the good, the upstanding, the ratzon Hashem.  We ask that in the merit of the shofar we are about to blow and the tefillot that we are about to say, that He answer us as He answered Avraham bi-har HaMoriah and Yitzchak his son she-neekad al gabei ha-mizbeich.

May this year be one of clarity and conviction for us all.